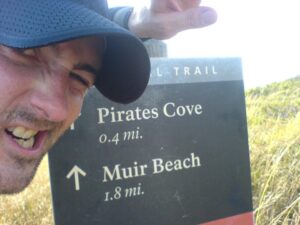 “Growing old is mandatory. Growing up is optional.” – Chili Davis

I want to make my own documentary films. It took me thirty eight years, two continents, two divorces, nine jobs, two startups and losing a fifteen year career as a publisher to figure that out, and after five years it’s still very much a work in progress. It’s a complicated story that I tell to encourage others not to quit…this is the short version.

“…and what do you want to be when you grow up little boy?”

I hated visiting Santa as a kid, because I knew that question was coming…I’d always felt the pressure to find ‘a good stable career’ being sired as I was from parents born under siege in Britain during world war two, who were raised in the era of a ‘job for life’ – they are roughly equivalent of what Americans call the ‘baby boomer’ generation. However, I never knew what that career could or even should be, let alone how one went about finding out. It never occurred to me that it was even remotely possible to invent one through sheer bloody-mindedness. If I could speak to that young version of myself, the one piece of advice I’d tell him would be to: “Listen to yourself more & everyone else less.”

I knew what I wished could be true: I was a dreamer and a racing addict; MotoGP and F1 filled my head. I wanted to do something like; race bikes and cars or be an international  adventurer like Indiana Jones (yeah I know he’s not real) and somehow stamp my name on the world…I wanted excitement, I wanted to be challenged & test myself against the universe.

Well that’s how my Lego adventures would normally pan out…however I was also smart enough by say, five of six years of age to know that dreams like those generally don’t come true for regular people like you and me.

For instance, I figured out very quickly that anyone that wants to be a racer needs first to have parents that also have petrol in their veins, because becoming a race driver of any kind costs a bomb; just Google what Anthony Hamilton, father of Lewis, did to enable his sons stellar career. Although my parents were not drowning in cash my sister and I had an amazingly rich childhood, however, it was far from being the type of childhood that was able to afford an extravagance like a racing go-kart or a motorbike. It wasn’t just the finances that weren’t there, it was the willpower; neither of my parents had any of the same interests as me.

Discovering that dreams are just that for most of us while still very young had a profound effect on me: I have always felt that a fate of complete boredom awaited me no matter what I did, so cynical and pragmatic was I about my prospects of doing anything that might be remotely enjoyable for a living. ‘Going to work’ gives most people no more satisfaction then paying the bills from week to week and this is true for all but a few lucky people. In my experience dreams were mainly there for those that can afford their upkeep and so, when I was asked at age seven “what I wanted to be when I grew up” I was completely stumped, and I mean monumentally crushed under the weight of not knowing, it was like having an existential crisis before I could even spell it.

What did I want to be?

What followed next academically was the expected rudderless boredom. I was so jealous of friends that had a handle on their future, they were so direct and focused on what they needed to do to get there. I on the other hand always felt like I was rowing a small boat across the Atlantic without a compass and if I’m honest I’ve never really felt like a ‘grown up’ in any traditional sense, highlighted by my endless affinity for inflatable bouncy castles. I cruised through school in an almost terminal state of yawning before continuing to be bored studying Physics, Design and Communications at A-Level, dumping them all and chasing Audio Engineering which was way less boring, but which was also way too expensive for me to take very far.

This is why I joined the workplace aged 16, getting a weekend job at McDonald’s Leicester Square while still studying. When I left school at 18, I spent the next 5 years in retail selling clothes, electronics & cell phones – an experience which sucked so bad I still to this day cannot listen to Christmas music. However, very unexpectedly in 1999 I got a job at a technical publisher selling ad space and met my first mentor who saw endless potential in me and is really one of the biggest reasons I have the gumption to even attempt what I’m trying to do. I started in ad sales, took over the content generation and started creating my own ideas, it was a magical time that ended abruptly with me replacing him when they pulled the plug on the UK operation.

I moved to the San Francisco Bay Area in 2003, tasked with setting up a new US version of the operation within the existing infrastructure. The next decade would see me spin out our operation into a co-founded company with my US boss, develop several new titles, get into government consulting, create partnerships with 30 R&D entities  and I was even flown to Beijing in 2011 to lecture at the Chinese Academy of Sciences’ Microelectronics Institute to a room full of students that were already far more qualified then I was at half my age. I genuinely thought I’d found ‘it’ – my career and maybe even my “American dream” – but I hadn’t. Our company folded in 2013 and after another year trying to start up a new concept in the same space I realized the truth; my career was obsolete and so was the 15 years I’d invested in it.

That’s how I came to be jobless and with no career direction again at 38, so I took the first opportunity that came my way. An offer to try and create my next job in a startup, by also creating a crowdfunding campaign to launch their first product. Any good crowdfunding campaign needs a video and so I learned to edit video and in doing so finally had an answer to the question asked 31 years before – I knew what I wanted to be; Sir. David Attenborough. Well, not literally of course, but I loved producing that video so much I realized it wasn’t ‘work’ as I’d ever known it before, although the hours were pretty long and punishing – I’d loved every second of it and so I was only mildly annoyed when the position I’d been offered evaporated after the interest in their technology failed to match expectations, but I didn’t care: I’d answered the question! Now all I had to do was figure out how to break into film, but before I did that I needed some experience – so I became a freelance videographer and learned on the job… 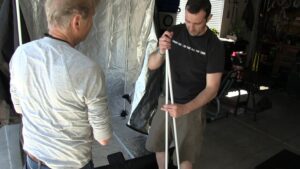 For four years I focused on making tons of content for other people learning as I went. I learnt the camera, how to coach presenters and even host video myself. I built shows, sets, test rigs. I figured out sound, color correction and just about everything needed to be self reliant  and after three years I finally felt I was in a position to take a stab at making documentaries so I collaborated with one of my biggest clients to 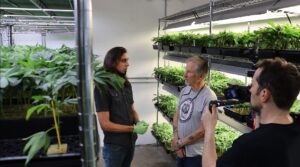 create my first called VETSGROW about veteran suicide & PTSD set to the backdrop of teaching a Vietnam veteran to grow medical cannabis at home.  It was the first completed documentary series that was my own creation, from start to finish it was a solo production, I filmed every minute, wrote every line of script and threw all the limited resources I had into making it – and I have plans to make many, many more…

So if you find yourself made obsolete by your career, your life or for any other reason…don’t quit, don’t give up and wave the flag of surrender…because it might just be the thing that lets you find out what you want to be when you grow up…

…and to me that’s priceless.